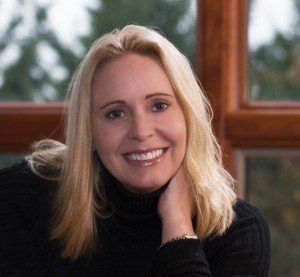 Victoria has been cooking and writing recipes since she was a young girl. Originally from Nebraska, her appreciation for culinary technique took off when she moved to Lyon, France.
While living in France, Victoria studied French cooking from an expert Lyonnais chef. Victoria learned to love the local culture of preparing and enjoying fresh, seasonal foods. While in France, Victoria experienced the joys of shopping for local produce at the market and preparing fresh foods simply and beautifully in order to enhance the experience of the table. During her time in France, she says she “learned how to squeeze tomatoes at the local market” and “took everything in by osmosis.”

Currently, Victoria creates tasty treats in her tiny kitchen, in New York City, for all to enjoy and on weekends she explores Fairfield County where has a second home. Victoria has shared her recipes with others and now you can enjoy the Tiny New York Kitchen recipe collection, too! Victoria is a member of Culinary Historian’s of New York and also a member of the Association for the Study of Food and Society.

Tiny New York Kitchen is an underwriter of NPR’s Western Swing & Other Things.