A Few Words About Bacon

Home » A Few Words About Bacon 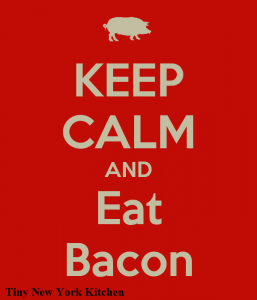 A Few Words About Bacon

Bacon is salted, dried, cured or smoked meat from the back or sides of a pig.  The term is derived from the Germanic bache/backe “back meat,” though at first the word referred to any part of a pig.  Flitch (or slab bacon) designates a whole chunk of bacon before it is cut into slices.  Burned bacon can be dangerous because burning it will produce carcinogens.

If you’re not doing it already then I have 3 words for you…BAKE YOUR BACON! Frying is the traditional way to cook bacon, but as we all know the high heat can make the bacon fat splatter all over the place.  Baking applies lower heat, reducing splattering and shrinkage.  It is also the best way to cook large amounts of bacon.  Arrange the bacon slices side by side on a large, parchment paper lined, baking sheet.  It’s a good idea if the baking sheet has a large rim on it.  Bake in a preheated oven at 400º F for about 20 minutes or until the bacon is crisp and browned.  Cooking food in the oven at this temperature is actually roasting, but there are times when the terms roasting and baking can be used interchangeably.  Remove the rendered fat as it accumulates with a bulb baster, if necessary.  When done it’s a good idea to transfer the bacon to paper towels to drain.

Generally bacon is about 50% fat.  As it cooks, the fat becomes liquid and separates from the meat.  This process is called rendering.  The rendered fat can be put in a tightly covered container and stored in the fridge or freezer for sautéing or frying other foods.

Purchasing the leanest bacon can be counterproductive, as the fat gives the bacon most of its desirable flavor and crispness.  Most of the extra fat melts off during cooking.  The fat on bacon should be about 1/2 to 1/3 of the total weight.  If you buy bacon from a butcher, you can ask for the rind to be removed and for the bacon to be sliced.  A whole slab stays fresher longer.  A butcher-cut slab can be stored for two weeks in the fridge or two months in the freezer.  The freezing does create ice crystals which causes the bacon to splatter when fried stovetop.

Did you know that bacon can be frozen for up to 4 weeks? The curing process affects the stability of the fat, which means that bacon can turn rancid even when frozen.  Although you can freeze the unopened package, it is usually better to separate the slices into conveniently sized amounts (about 4 ounces or so for breakfast).  Wrap the bacon tightly in plastic wrap, then overwrap with aluminum foil.  For added protection place in a ziplock bag. Long-term freezing is not recommended. Thaw thoroughly in the fridge before cooking.

Once the vacuum pack is opened, bacon will usually keep for only about a week in the fridge, although sometimes it will keep for a couple of weeks.  The ends may darken and dry out and they should be sliced off and thrown away before using.  To make bacon crumbles, chop the bacon first and then cook it. 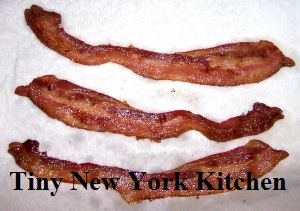