Certain Produce Shouldn’t Be Stored In The Refrigerator

Certain Produce Shouldn’t Be Stored In The Refrigerator

With some fruits and vegetables cold temperatures can lead to unsavory textures and flavors. Let tomatoes sit on the counter at room temperature, and store onions, garlic, and potatoes separately in a cool, dark place in perforated baskets or bins to allow for good airflow. Make sure to keep all fresh produce away from direct sunlight.

Onions & Garlic can lose crispness and become moldy when exposed to the refrigerator’s moisture. They can also impart their flavors on foods stored nearby.

Tomatoes flavor often diminishes when they’re chilled, and the texture can turn mealy as the cold temperature breaks down the membranes inside the fruit.

Potatoes starch content converts to sugar when cold, which leads to an unpleasantly sweet taste and discoloration when they’re cooked. 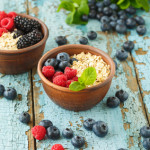 Here is another use for the whole grains and seeds that you’re seeing at the store. Top off with delicious flavoring, which are also tasty on oatmeal. Amaranth (3/4 Cup) Bring 2 1/4 cups water or milk to boil in saucepan. Stir in amaranth. Reduce heat to low, cover and simmer until tender. Read More