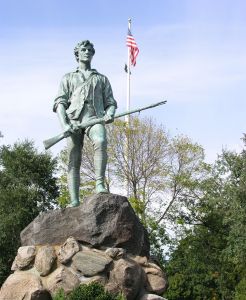 The longer winters in New England produced a diet somewhat different from that in Virginia.  Not as many varieties of fruits and vegetables grew as in the South, and emphasis was put on those which would store well or which could be converted to something stable through drying, salting, or pickling.  The staple grain in the early days was rye, in addition to the new grain, Indian corn.  A common bread was called “Rye’ n Injun,” and was baked from a yeast dough of rye, cornmeal, and molasses.  Wheat did not grow well in the harsh climate, and the small amount of wheat flour available was used “for best,” as was the refined sugar.

Sweet potatoes and other root vegetables and cabbages were major items on the menu.  All cooking was done in cavernous fireplaces, either in kettles or on spits.  The cooking range, although invented by Count Rumford in the late 1700’s, didn’t become popular until the Civil War era.  The New England boiled dinner of corned beef, potatoes, cabbage and whatever else was available, was a natural outgrowth of fireplace cooking.  Beans baked in a pot set in the coals also fit the New England style of cooking and the available found supply.

Although mutton had been the main meat supply in England, pigs were more attractive than sheep in the new land.  For one thing, sheep usually had only one lamb at a time, while a litter of pigs a dozen strong was not uncommon.  Also, pigs could forage for themselves at an earlier age than sheep, and thrived on the vegetation in forest and field.

Cattle were kept largely for milk and cheese, and although they were scarce at first, they reproduced prolifically in the Northeast.  In fact, the Reverend John Cotton once remarked “milk and ministers were the only things cheap in New England.”

In other parts of the country, settlers found more new foods and used them in new ways.  In Louisiana, for example, French settlers adapted their old world recipes to accommodate such new foods as tomatoes, okra, crayfish, red snapper, catfish and, of course, corn.  The climate was amenable to growing fruits and vegetables year ‘round, making a varied diet easy to get – even if it didn’t taste like home.

In the Charleston and Savannah areas, rice cultivation began very early, in 1694, and soon became a major business.  Much of the rice was exported.  Oranges were also grown in the Charleston area.

In the Southwest, the Spanish had developed a cuisine all their own, as they moved north from Mexico and Latin America.  New varieties of beans, plus the ever-present corn, were cooked with traditional Spanish spices plus something unknown in Spain – hot peppers.  With the continual warm weather were also possible, at least where water was available, and there was little emphasis on preservation.  In the more arid areas, however, variety was as limited as during winter in New England.  Beans, corn and squash were the order of the day.

As time went on, Americans moved west, and the frontiersmen had an entirely new set of problems to meet.  Trappers and explorers traveled light, and that usually meant living primarily off the land. Many subsisted almost exclusively on meat, killing bear, venison and small game as they went.  One of Pierre LeSeur’s men wrote in his journal of consuming about 10 pounds of buffalo meat each day, plus four bowls of broth.  While buffalo meat apparently took some getting used to, this particular explorer wrote that “it made us quite fat, and none was sick.”

One “recipe” called for bear steak fried in tallow and covered with whisky – meat and drink in one meal!  Pemmican, made from dried meat, fat and berries ground together, was travelling food.  Beef and buffalo cut into strips and dried in the sun was called “jerky,” and kept well, even though it was tough chewing!

Bread was almost unknown, but occasionally a hardtack or ship biscuit could be obtained at a trading post.

The frontiersmen, including migrating settlers, also found the edible wild plants to be helpful sources of nutrients missing from the dried and salted staples.  These included such things as dandelions, polk sprouts, sassafras, grapes and various nuts and berries.  When they found a place to stay for a season, corn could be planted by simply making a hole with a pointed stick or ax, dropping several kernels into the rich soil – and a crop would grow; plowing simply wasn’t necessary.