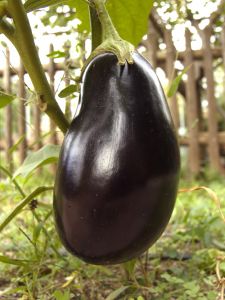 Eggplant (also known as Aubergine or Melongene) is an egg-shaped vegetable with a typically dark purple, shiny skin, though some are yellow or white.  Eggplant was so named because the delicate white varieties that resemble eggs.  Eggplant grows on a plant (Solanum Esculentum) in the nightshade family and is actually a fruit and not a vegetable.  It is actually technically a berry.  Eggplants have not always been popular.  They were once known as “mad apples,” because it was thought that they caused insanity or death.  They have been used in China since 600 BC.  Thomas Jefferson first brought the eggplant to America from France in the eighteenth century.  Male eggplants are rounder and smoother at the blossom end.  They have fewer seeds which are bitter.  Female eggplants are more oval and the blossom end is usually deeply indented.  They tend to have more bitter seeds.

Store eggplants in perforated plastic bags in the vegetable crisper of the refrigerator for four to five days.

Eggplants should be cooked immediately after peeling or cutting because the exposed flesh discolors rapidly due to oxidation.  To prevent this start cooking as soon as you have cut it.  If there is an unavoidable delay, promptly coat the surface with lemon juice or submerge with pieces in acidulated water.

Salt the flesh of a large cut-up eggplant to draw out any bitterness.  For frying, it is always good to salt the eggplant or otherwise remove excess moisture.  Only eggplants with tough, thick skins need to be peeled.

Eggplants should be cooked in only the minimum amount of fat or oil or without any at all because they have inner air pockets.  Eggplants can absorb several times their weight in oil, even when breaded.  Cooking with too much oil or fat breaks down the eggplant’s texture.

Slicing eggplants is so much easier when using a serrated knife.