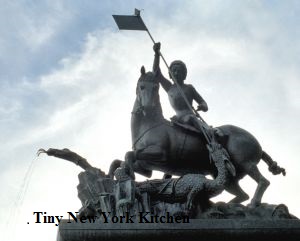 April 23rd is the Feast of Saint George.  For all of his popularity little is known about Saint George except that he was born in Cappadocia (Turkey), that he was a soldier and suffered martyrdom.  The crusaders brought his fame to the West.  He is the patron saint of England, Aragon, Portugal and certain parts of Germany.  Before the Conquest many English churches had been named after Saint George and the story of his brave deeds were revered everywhere.

Saint George’s best known deed is legendary. Legend has it that he slayed a horrible dragon in order to save a maiden who had been vowed to a monster.  The story goes that Saint George transfixed the dragon with a spear and then told the maiden to lead the monster around so that he could put an end to him.  St. George was very well known by that time as a man of God and a confessor of His works.  Apparently, after witnessing the miraculous slaying of the dragon, 20,000 people were converted to Christ.  The king begged St. George stay in exchange for half of the kingdom.  St. George refused the offer because he wanted to ride on and carry God’s message.

Saint George is especially honored in England as its great patron.  Flags are flown on this feast day, but in earlier times this feast day was filled with more elaborate celebrations (processions, jousts & races).  The dishes served on this day should be English favorites such as roast beef and Yorkshire pudding.