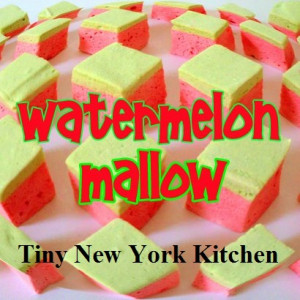 Last week I attended New York City’s Fancy Food Show at the Javits Center.  It was a very rainy and muggy day, but I decided to walk there from the East Side anyway.  Naturally the place was packed with vendors and attendees which was exciting to see.  I walked through isle after isle looking at and sampling many food items, but to be honest much of it was the same old jarred salsa, jams and ice cream.  I probably spent a good 2 1/2 hours looking at everything and was getting ready to leave when I realized I had missed a “new products” isle.  I forced myself to give the isle a quick run through even though I had a long walk back in the rain.  I have to say that I was truly happy that I did because I ran into a new product called Mitchmallows.  Typically, I am not a huge fan of marshmallows, but the bow-tie wearing guy behind the booth (Mitch) was super nice and invited me to try the different flavors that he had out for sampling.  I couldn’t believe how good these marshmallows were and tried several different flavors just to make sure.  There were trays of colorful marshmallows like Watermelon, Creamsicle, Pretzels & Beer, Ginger Wasabi, Banana Split, Pink Lemonade, Churros and Maple Syrup Pancake.  My favorites were the Watermelon and Churros flavors.

Most of you know that I don’t write a review of a restaurant or a product unless I really like it.  I am extremely happy that I ran into Mitch and his Mitchmallows.  What a great idea and what a unique food product.  If you’re a fan of marshmallows or even if you’re not into marshmallows you just may want to give these puppies a try.  This was by far the best thing that I found at the Fancy Food Show and the added bonus was meeting the owner who was completely flip over his product.  I’m not sure if Mitchmallows are sold in stores yet, but you can order them from the website.  I saw the packaging and they come in cute little tins.  Go to the website and check it out at http://www.mitchmallows.com/ and tell them that Tiny New York Kitchen sent ya. 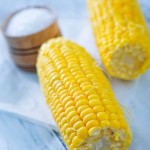 As much as I love this hand-held summer superstar teamed or grilled, a little effort goes a long way in creating a more substantial summer side. I love cutting corn right off the cob, getting chunky clumps of corn kernels that I then lightly sauté – this brings out a bold sweetness. Sautéing tends to brighten the corn, and it holds up well on its own or tossed with other ingredients. Please don’t open any ear of corn at the market looking for perfection. You can feel if it is a big intact fat ear. Read More