One of the hallmarks of a feast in seventeenth century England and New England was the presence of several kinds of meat. The menus for the formal dinners of the wealthy might feature more than two-dozen kinds of meat. Even middle class people expected a nice dinner to feature a couple of varieties of meat. Undoubtedly, several meats were served at the 1621 celebration.

For large eighteenth and nineteenth century Thanksgiving gatherings, a single turkey hardly sufficed. Other meats filled out the menu, for example a roast of pork and a substantial chicken pie. In the mid 1800s in Stonington, Connecticut, Grace Denison Wheeler said about her childhood holiday dinner “the big turkey, brown and shining was accompanied by two big pans of chicken pie and roast pork, crisp and brown, clove studded so it had a spicy odor.” Since the holiday fell in the autumn butchering season, it was natural for farm families to have fresh pork on hand. Town dwellers who purchased their meat from butchers could have fresh meat more easily year round, and for them a chicken pie required a good deal less work than for the country dwelling folk, who would have to kill and pluck their own chickens before making a pie.

The Best Way To Clean Leeks 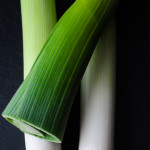 Because leeks grow deep in the soil the fine layers inside can be difficult to clean. When using leeks in a recipe, trim and slice the leeks first, then add to a bowl of water and stir. The dirt will sink to the bottom of the bowl. "Work With What You Got!" ©Tiny New York Kitchen © 2020 All Rights Reserved Read More