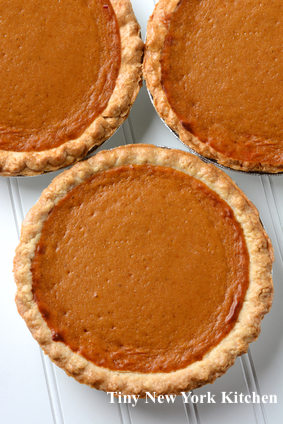 Pumpkins earned their name because of their round shape. The English called them “pompons,” which came from the French word “pompom.”

Like many early American dishes, pumpkin pie is a product of indigenous ingredients and English culinary tradition. First cultivated in Central America around 5500 B.C., pumpkins were one of the first foods settlers brought back from the New World. The English quickly added pumpkin to their pie-making tradition, so by 1620, when the Mayflower sailed to the New World, it’s likely some of the Pilgrims were already familiar with these orange gourds.

There’s a very good chance that when the first Thanksgiving was held a year later, pumpkin was on the table in some form. By the early 18th century, Thanksgiving was a well-established holiday throughout New England, and pumpkin pie was part of the feast.

In 1705, Colchester, Connecticut, postponed Thanksgiving for a week, because there wasn’t enough molasses, their sweetener of choice, to make the pies.

Making Sure You Have Enough
Turkey Basics