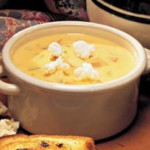 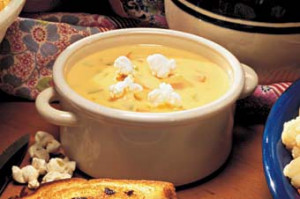 I love soups! I love it when the weather turns cool so that I can whip up soups galore. Here is a nice cool weather soup that I think you will like. 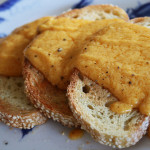 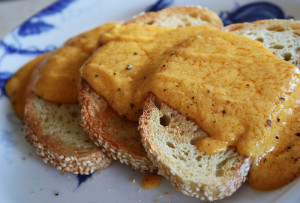 The first recorded use of the term Welsh Rabbit was in 1725.  It is said to be an ironic name coined in the days when the Welsh were notoriously poor and only well-to-do people could afford meat from the butcher.  In England rabbit was the poor man’s meat, but in Wales cheese was the poor man’s meat.  The slur against the Welsh was, “if a Welshman went rabbit hunting then this would be his supper.”

Put the butter in a saucepan over medium heat.  When the butter melts stir in the flour.  Continue to cook for 5 minutes (stir occasionally) until golden brown and very fragrant.  Stir in the mustard and cayenne and then whisk in the beer & Worcestershire sauce.  When the mixture is uniform, turn heat to low and stir in the grated cheese.  Stir until smooth.  Remove from heat and pour into a bowl to set.  You can refrigerate for up to a day.  Spread the mixture thickly on toast and put under the broiler until bubbly and edges of the toast are crisp.  Serve immediately.  Serves 4 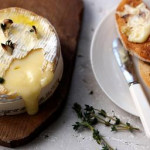 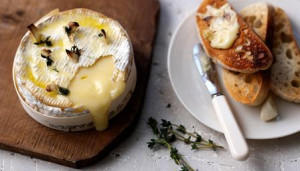 One 9 Ounce Camembert (In Wooden Box)

Preheat oven to 400° F.   Remove the camembert from the box and throw away any wax paper packaging.  Take a 10 inch square of foil and place in the wooden box.  Place the camembert back inside the box.  Pierce the top of the camembert with the tip of a knife and push in the slices of garlic along with thyme leaves.  Drizzle with honey.  Loosely scrunch the foil up over the cheese and set aside.  Brush two 12 inch square sheets, the size of your baking sheet, of parchment paper with oil.  Line the baking sheet with one of the oiled parchment sheets – oil side up.  Spread the slices of baguette over the sheet.  Drizzle with olive oil and sprinkle with crushed sea salt.  Place the remaining sheet of parchment – oil side down – over the bread.  Place in the oven with the camembert and cook both for 10 minutes or until the cheese has risen and the bread is crisp.  Open up the foil and dip in the hot baguette.  This is delicious!  Serves 4