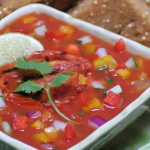 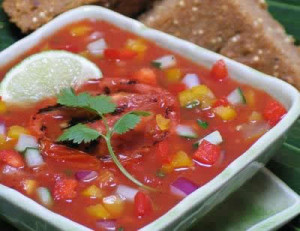 Often described as a liquid salad, gazpacho descends from ancient Roman concoction based on a combination of stale bread, garlic, olive oil, salt and vinegar.  As Romans labored to build roads and aqueducts across Spain in the scorching heat, this creamy soup replenished them with the necessary salt and vitamins lost through physical exertion.  Later, shepherds and farmers added vegetables to make it more hearty and satisfying.  Because tomatoes and bell peppers were not indigenous to Spain, these ingredients were not added to the soup until after Spain’s discovery of the New World.  Since that time, gazpacho has remained relatively unchanged.  We are grateful for such an unpretentious soup designed to quench the thirst evoked by the unrelenting Spanish sun.

Halve and seed the cucumber, but do not peel it.  Core and seed the three bell peppers.  Roughly chop the cucumbers, bell peppers, tomatoes and red onion into 1 inch cubes.  Reserve a small bit of each vegetable to put in at the end so that the soup has some crunch.  Put each vegetable separately into a food processor fitted with a steel blade and pulse until it is coarsely chopped.  Do not over process.  After each vegetable is processed, combine them in a large bowl and add the garlic, tomato juice, vinegar, olive oil, salt and pepper.  Mix well and chill before serving.  The longer the gazpacho sits, the more the flavors develop.  Serve anytime, but especially on a hot summer day.  Serves 4 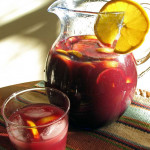 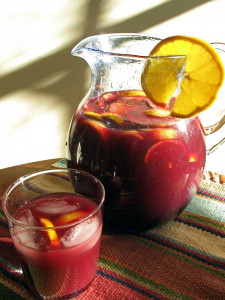 Sangria has been important to Spanish culture for many centuries.  This wine punch has gained international popularity and is easy to make at home.  Versions of Sangria have held a planting of the Iberian Peninsula’s vineyards around 200 BC.  As Spain’s soil and weather are particularly well suited for growing grapes, the nation has maintained an abundance of red wine and its subsequent wine punch variations.  Interestingly, there is no one recipe for Sangria, as the ingredients of this wine punch are based on availability, season, and a number of other factors.

Sangria requires a light, young Spanish red wine.  The most common of these come from the La Rioja, Castilla-La Mancha and Catilla-Leon regions.  It is also necessary to include fresh fruit.  Spain’s popular locally grown fruits include oranges, lemons and melon.  Any fruit can be used, however, one might find bananas, apples, grapes or any number of fruits in Spanish Sangria.  Sangria is meant to be light and refreshing so a certain amount of juice and sugar are generally added for a more refreshing taste.  Sangria is to be served ice-cold and generally is prepared in large pitchers and served to guests as an accompaniment to a meal or tapas in the summer time

Sangria is to be served ice-cold as a hot-weather refreshment. Generally, it is prepared in large pitchers and served to many guests as an accompaniment to a meal or tapas in the summer time.

In a 2 quart pitcher stir together orange and lime juices.  Add wine, sugar and brandy.  Stir until sugar is dissolved.  Cover and chill for 3 to 24 hours.  Serve over ice.  Garnish each serving with orange and lime slices.