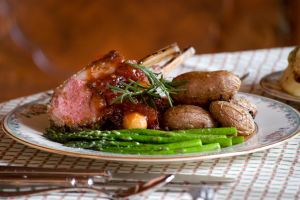 This is such an easy Sunday meal.  For this traditional Roman dinner, purchase 1/4 of a nice fat “abbacchio”.  In Rome “abbacchio” is a very young lamb, which has been fed only with milk. I usually purchase my “abbacchio” from a nice butcher in the Arthur Avenue area of the Bronx. If you don’t want to buy 1/4 of a young lamb then just get a decent sized leg of lamb that will accommodate the size of your family (make sure it’s not been previously frozen).  Insert cloves of garlic, both lean and fatty ham, chopped stalks of rosemary, kosher salt, freshly ground pepper, and brush all over with olive oil.  Salt again and roast in a medium hot oven (350 degrees) for 1 hour together with lots of raw potatoes either whole (small potatoes) or cut into pieces (larger potatoes). After about half an hour, add 1 glass of dry white wine and turn the lamb over and cook the other side for another half an hour.  When the lamb is done roasting, cut into pieces and serve with the potatoes, steamed asparagus and a nice chicory salad.

Note:  By the way, if you’ve never been to Arthur Avenue in the Bronx then you’re really missing quite an experience.  Forget Little Italy downtown because Arthur Avenue is the real deal although tourists have discovered it as well. A great time to go is during the Christmas season.  Often times they have Frank Sinatra piped Christmas songs blaring from loud speakers posted high up on the lampposts.  My Arthur Avenue butcher is a total crackup.  He’s in a great mood during the Christmas season because according to him it’s the one time of the year that his wife is “nice” to him if you know what I mean and he’s not shy to chirp about it either.  My husband is Italian and looks it so much that they say the map of southern Italy is stamped on his face.  One time I needed to pick up a few things on a Saturday during the holidays and it was so busy that there was no parking to be found.  My husband found a spot, but the meter was broken.  There was a “group” of Italian men donned in the “I can’t fit in my clothes” velour track suits (adorned with gold chains carrying either St. Christopher or the Virgin Mary herself) hanging around by the broken metered parking spot.  My husband was inspecting the broken meter worrying about a parking ticket when the guys pipe up, “Heeeey don’t worry bout it.  We’ll watch to make sure you don’t get a ticket. We’ll take care of it.”  Sure enough we get back to the car after about an hour and no ticket even though we could see the NYC parking police patrolling the streets.  My husband said a sincere, “thank you” to which he received a sincere “don’t mention it” and we were on our way. 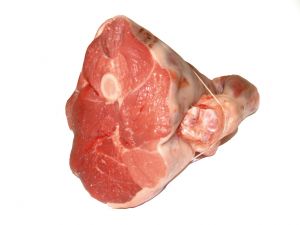