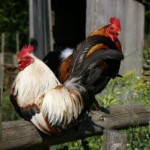 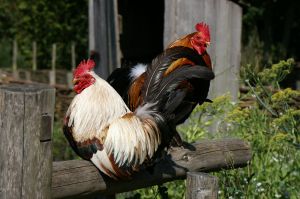 I have loved chickens for many years.  Twenty years ago I had a chicken coop built on my property where I lived in the Pacific NW.  I raised laying hens so that I could cook with fresh eggs.  During the day I let my hens roam my property and at dusk my son’s corgi would herd them into their coop.  Each morning I would go out to the coop, thank the “girls” and gather beautiful fresh eggs.  Those days are gone and I now live a much different life dividing my week between my apartment in New York City and my house in Fairfield County.

Here are some fun and interesting chicken facts:

Chickens are omnivores.  In the wild they will scratch the soil searching for seeds, insects, young mice and lizards.

The older the hen the larger the eggs she lays.

Chickens can live for 5 to 10 years depending on the breed.  According to, The Guinness Book of World Records, the world’s oldest chicken died of heart failure at age 16.

A fresh egg sinks in a bowl of water, and old egg floats.

Hens start clucking to the eggs a few days before hatching, making it more likely that they will all hatch at approximately the same time.

DNA evidence suggests that chickens are the closest living relatives to the Tyrannosaurus Rex.

The first pictures of chickens in Europe were found on 7th Century BC Corinthian pottery.

Eggs dry out more quickly in your refrigerator’s egg rack so it is best to leave them in the carton.

It is estimated that there are four chickens to every human on the planet.

The egg carton was invented in 1911 by a Canadian newspaper editor named, Joseph Coyle, in Smithers, British Columbia

An egg standing on its end can bear up to 200 pounds.  The record was set by the Ontario Science Centre.

For best results, eggs should be brought to room temperature when used for baking.

A plastic egg, golf ball or avocado pit placed in a nest will encourage a hen to lay in it.  This is the origin of the term “nest egg.”

“Go away, boy! Or I’ll spank you where the feathers are the thinnest.”  – Foghorn J. Leghorn