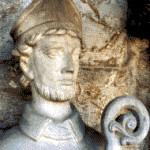 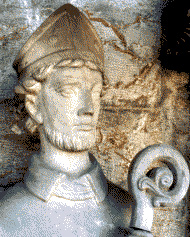 Saint Swithin is one of the “weather saints” particularly rain. There is a saying that goes:

For forty days it will remain;

Saint Swithin’s Day, if thou be fair,

Saint Swithin’s connection with the weather, and particularly with the rain, doubtless comes from the legend that in his humility he asked to be buried outside his cathedral, where passersby would step over his grave and raindrops from the eaves would fall upon it.  He lived in the 9th century and was for a time one of the counselors of the Saxon king, Egbert.  Later be became Bishop of Winchester, where great devotion to him long prevailed.  Little else is known of him except that his feast is celebrated on the date when his relics were removed from the humble grave he had desired and placed, nearly a century after his death, in a new shrine built for him, where many miraculous cures took place.

Besides the rain, Saint Swithin’s specialty is apples.  To honor Saint Swithin we are making Apple Crumble Pie.