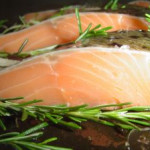 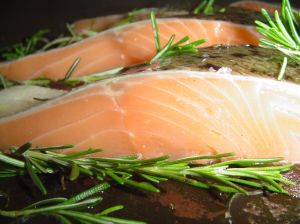 Chowder is centuries old and was considered to be poor man’s food.  Fish chowders were the forerunner of clam chowders.  Chowders that the early settlers made were very different from other fish soups because they used salt pork and ship’s biscuits for their chowders.  I love a good chowder and am sure happy that I am not eating hockey puck-like ship’s biscuits in my chowder. Try my Salmon & Asparagus Chowder tonight or this weekend for real New England comfort food.

Rinse the salmon and pat dry with paper towels.  You will now need to poach the salmon.  In a large skillet bring 1 1/2 cups of water to a boil.  Add the salmon and return to a boil.  Turn the heat down to a simmer and cover with a lid.  Cook 8 minutes and then remove the salmon from the skillet.  Throw away the parching water. Flake the salmon into 1/2 inch pieces and set aside.  In a large soup pot combine the vegetable broth, onions, potatoes, dill, lemon peel, kosher salt and pepper.  Bring to a boil and then turn the heat down to a simmer.  Cover with a lid and let simmer for 20 minutes.  Stir occasionally.  In a large jar, with a screw on lid, combine the milk (or half & half) with the cornstarch.  Cover the jar and shake like crazy.  Add the milk to the soup.  Stir in the asparagus and cook until the mixture is slightly thickened and bubbly.  Cook and stir for 3 minutes more.  Gently stir in the poached salmon and cook for 4 minutes until the salmon is heated through.  Transfer to soup bowls and serve hot.  Serves 6 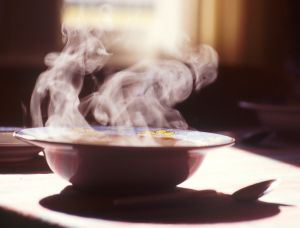 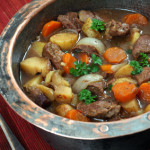 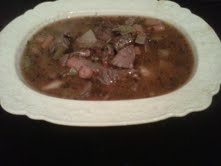 I have been making Irish Stew for years. The worst stew that I have ever had was when I went to Stonehenge a few years ago. There was this food cart outside of Stonehenge and I was super hungry. It was cold outside and I needed something to warm my tummy. I plunked down my money and got a paper bowl full of I don’t know what. I honestly didn’t know that someone could make stew that bad. At any rate, here is my recipe for Irish Stew that I am sure that you will love.

Melt 1 tablespoon of butter in a large saucepan over a medium heat. Add the lamb and sprinkle with ½ teaspoon salt and ¼ teaspoon pepper. Cook and stir for 7 minutes. Remove the meat to a plate and set aside. Melt the remaining 1 tablespoon of butter in the same pan. Add the potatoes, onion, leeks, carrots and garlic. Cook and stir for 5 minutes. Return the lamb to the pan and add the remaining salt, pepper and the other remaining ingredients. Continue to cook for 10 minutes until the stew comes to a boil. Reduce the heat to low. Put the lid on and cook for 2 hours. Ladle into bowls and serve hot. Serves 6 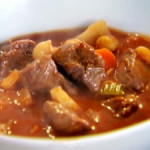 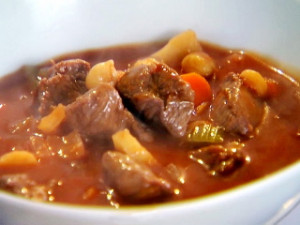 Combine the lamb, water, vegetables, bouillon granules, herbs, bay leaf and Worcestershire sauce in a large stock pot. Bring to a boil over a high heat. Reduce the heat and simmer for 2 hours until the meat is tender. Remove the bay leaf and skim off the excess fat. Serve with sourdough bread and you have the best winter meal ever! Serves 4 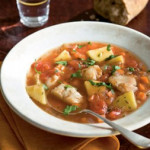 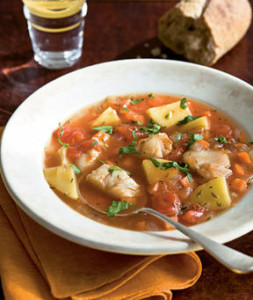 This recipe is for my best friend in the whole world whose family came from Portugal. The Portuguese are great lovers of fish have created simple but delicious seafood recipes over many years. I think you will like this version of Portuguese Fish Stew.

Soak the cod in water for 24 hours. Change the water two or three times. Drain the cod and cut in 2 inch rectangles. In a medium cooking pot place the cut cod and bring 6 cups of water to a boil. Turn the heat to medium low and simmer for 15 minutes. Drain the cod and remove the skin and any small bones. Break the fish into flakes and set aside. Heat the olive oil in a large skillet over a medium high heat. When the skillet is hot stir in the chopped onions, carrot, garlic and potatoes. Cook for 3 minutes until the onions are translucent. Add the cod, tomatoes, parsley and wine. Season with the thyme, pepper and salt. Cover the skillet and simmer on a low heat for 2 ½ hours. The fish should be extremely tender. Serves 4 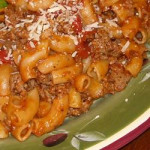 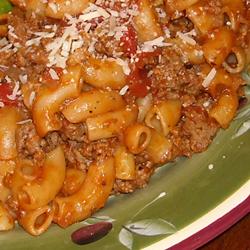 Goulash, meaning herdsman, is a Hungarian meat and vegetable stew seasoned with paprika. There are many versions of this dish and each country tends to have their own Goulash. Goulash is popular in Hungry, Romania, Czech Republic, Slovakia, Austria, the United States, Germany, The Netherlands, northern Croatia and the Italian region of Friuli Venezia Giulia. This is the Goulash that I grew up on. It is totally a guilty pleasure.

Cook the noodles according to the package directions. Drain noodles and set aside. In a large skillet cook the ground beef with the minced garlic, onion and mushrooms until browned. Make sure to drain off the excess fat. Add the tomato sauce, water, bay leaf, oregano, paprika, ground pepper and salt to the ground beef mixture. Simmer for 20 minutes. Add the cooked noodles and simmer for another 5 minutes. Remove the bay leaf before serving. Serves 6 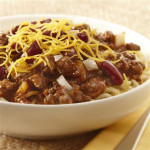 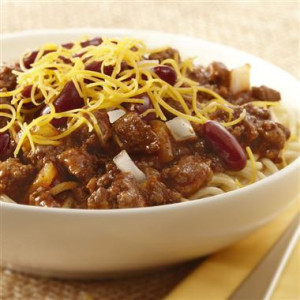 There are many variations on this dish all over Cincinnati.  A “three-way” is over spaghetti with shredded Cheddar on top.  Add chopped onion and it becomes a “four-way.”  For a “five-way” add cooked red kidney beans.

Heat olive oil in a Dutch oven over medium heat.  Add the onions and cook for 5 minutes until tender.  Transfer to a small bowl and set aside.  Add the garlic to the Dutch oven and cook 1 minute longer.  Transfer to the bowl of cooked onions.  In the same Dutch oven, cook the ground sirloin over high heat.  Break up the meat and cook until the meat is browned.  Stir in the chili powder, cumin, cinnamon, salt, oregano and cayenne.  Cook 1 minute longer.  Next, add the tomatoes with the juice to the Dutch oven.  Break up the tomatoes.  Stir in the beef broth, water, chocolate, browned sirloin, onions and garlic.  Heat to a boil and then reduce the heat.  Cover and simmer for 3 hours.  Remove the cover and simmer another 30 minutes until thickened.  Meanwhile cook the spaghetti.  Drain and serve the chili over the pasta.  Serves 8 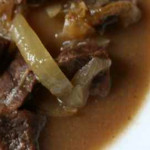 Everything tastes better cooked in beer!

Place the olive oil in a heavy pot and heat until hot.  Make sure that the oil is not smoking.  Add the beef and brown all sides.  Remove the beef to a platter and set aside.  Add the onions and garlic to the pot and brown.  Stir occasionally.  Sprinkle the onions and garlic with the flour and cook for another 3 minutes.  Gradually add the beer and reduce the heat.  Cook slowly uncovered for 25 minutes.  Make an herb bundle by combining the allspice, bay leaf, thyme and peppercorns in a piece of cheesecloth.  Secure with kitchen twine.

Add the beef back to the pot of cooking liquid.  Add the herb bundle and simmer, covered, for 1 hour.  Next uncover the pot and cook uncovered for another 30 minutes. When done remove the herb bundle.  Serve with a side of mashed potatoes.  Serves 6