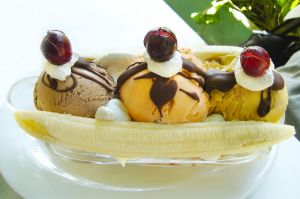 August 10th is National Banana Split Day!  I haven’t had a Banana Split in years so I think that I’m due for one. The traditional banana split is an ice cream dessert of a banana that has been split lengthwise (hence the name), served with three scoops of ice cream which could be different flavors or the same and topped with three different flavors.  Many add whipped cream, chopped nuts and/or cherries.  Legend has it that David Evans Strickler, a 23 year old apprentice pharmacist at Tassel Pharmacy in Latrobe, Pennsylvania, who enjoyed inventing sundaes at the store’s soda fountain, invented the banana based triple ice cream sundae in 1904.  The drugstore chain Walgreen’s is often credited with promoting the early banana splits in its soda fountains.

3 Scoops Ice Cream of Your Choice

In a long dessert dish place banana slices against the sides.  Put the three scoops of ice cream in a row between the banana slices.  Pour the chocolate syrup over the three scoops.  If you are using strawberry syrup and marshmallow cream then just pour the chocolate syrup over one scoop, the strawberry syrup over the second scoop and the marshmallow cream over the third scoop.  Sprinkle the tops with pineapple bits and nuts if you are using them.  Garnish with whipped cream and pitted red cherries.   Makes 1 Banana Split