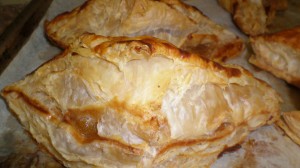 A relative of Middle Eastern phyllo dough as it is used in a similar manner to create layered pastries. It is thought that French painter, Claude Gelée, who lived in the 17th century. Apparently, Gelée was making a type of very buttery bread for his sick father. The process of rolling the butter into the bread dough created a croissant like finished product. Other Puff Pastry references before the 17th century which indicates that the history was originally from Muslim Spain and was converted from thin sheets of dough spread with olive oil to laminate the dough with layers of butter. Puff Pastry is commonly used for turnovers, Steak & Kidney Pie, other types of pie, sausage rolls, Beef Wellington, strudel and Miguelitos (a cake made in Spain). Here is a basic and quick Puff Pastry recipe.

In a large mixing bowl stir together the flour and salt. Cut the cold butter into ½ inch thick sliced. Do not cut the butter into cubes. Add the butter slices to the flour mixture and toss until the butter slices are coated with the flour mixture and are separated. Pour the ice water over the flour mixture. Using a spoon, quickly mix. The butter will remain in large pieces and the flour will not be completely moistened. Turn the dough out onto a lightly floured surface. Knead the dough 10 times by pressing and pushing the dough together to form a rough looking ball. Shape the dough into a rectangle. Don’t be concerned that the dough will still have some dry looking areas. Make the corners as square as possible and slightly flatten the dough. Working on a well floured surface, roll the dough into a large rectangle. Fold crosswise into thirds to for a slightly smaller rectangle. Give the dough a quarter turn and then fold crosswise into thirds to form an even smaller rectangle. This should create 9 layers. Repeat the rolling, folding, turning and folding process one more time. You should have a rectangle that is approximately 5×4 inches. Wrap the dough in plastic wrap and stick in the fridge for at least 20 minutes. To use the dough in your recipe cut the dough in half crosswise with a very sharp knife. Makes two 1 1/3 pound portions.