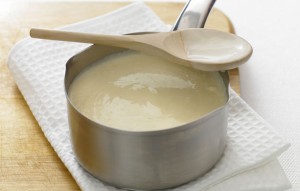 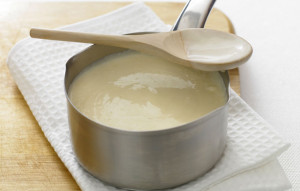 Béchamel Sauce, also known as White Sauce, is one of the “mother sauces” of French cuisine. Also used in many Italian recipes such as lasagna. This sauce is also used as a base for other sauces mainly Mornay sauce, which is Béchamel with cheese.

Melt the butter in a heavy saucepan and stir in the flour. Stir constantly and cook for two minutes until the mixture bubbles just a bit. Do NOT let the mixture brown. Add the mot milk and continue stirring as the sauce thickens bringing it to a boil. Add the salt and pepper and lower the heat and cook for 3 more minutes. Remember to constantly stir and don’t leave unattended. Remove from the heat and cool if you are going to use this sauce later. A good tip for storing this sauce for later use is to pour a film of milk over the mixture before storing. This will prevent a skin from forming. If you decide to make this into a cheese sauce just stir in ½ cup of grated cheddar cheese during the last 2 minutes of cooking along with a pinch of cayenne pepper. Makes 1 cup