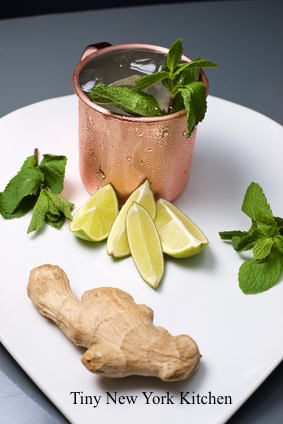 If you’re looking to serve a unique adult beverage this holiday season give the Moscow Mule a try. A Moscow Mule, also know as a Vodka Buck, is a mule made with vodka, spicy ginger beer, simple syrup, and lime juice, garnished with a slice of lime. Served in a copper mug this cocktail became popular during the 1950s vodka craze here in the United States. The Moscow Mule was invented in 1941 by John G. Martin of G.F. Heublein Brothers, Inc., an East Coast spirits and food distributor based in Hartford, Connecticut, and Jack Morgan, president of Cock ‘n’ Bull Products (which produced ginger beer) and proprietor of the famous Cock ‘n’ Bull restaurant on Sunset Boulevard in Los Angeles.