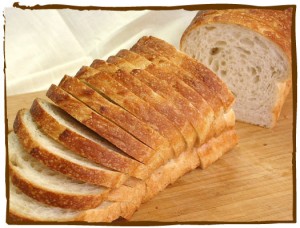 The Pullman Loaf is sometimes called the sandwich loaf or pan bread. The Pullman is a type of bread made with white flour and baked in a long, narrow and lidded pan. The French term for this style of loaf is “pain de mie.” In the United States, many popular mass produced sliced breads are actually Pullman loaves. The slices of these breads are frequently square, with four flat and uncurved crusts. The name Pullman was derived from its use in the compact kitchens of the Pullman railway cars. The Pullman Company is credited with inventing the lidded baking pans used to create the square loaves. Three Pullman loaves occupied the same space as two standard round-topped loaves, thus maximizing the use of space in the Pullman Kitchen.

Spray a large size mixing bowl with cooking spray and set aside. If you don’t have cooking spray then grease the bowl with olive oil. Spray 2 (9×5 inch) Pullman pans or 9x 5 inch bread pans with cooking spray (olive oil if you don’t have cooking spray) and set aside. In a separate large bowl combine 3 cups of bread flour, unbleached flour, yeast and salt. In a small saucepan combine 2 tablespoons of water, butter and honey. Heat over a medium heat until the mixture registers 120° F on an instant read thermometer. Make a well in the center of the flour mixture and add the water mixture. Add the egg. Using a mixer on low speed beat for 2 minutes. Add enough remaining bread flour to make a soft dough.

Punch the dough down and divide into 2 nine inch loaves. Place the loaves into the prepared pans. Cover and let rise in a warm place for 1 hour or until the dough has doubled. Preheat the oven to 350° F. In a small bowl whisk together the egg white and water. Using a pastry brush, lightly brush the loaves with the egg white mixture. Bake for 25 minutes until the loaves are deep golden brown. Remove from the oven and cool in the pans for 10 minutes. Remove from the pans and cool on wire racks for 30 minutes before slicing. Store, covered, at room temperature for up to 5 days. Makes 2 loaves.