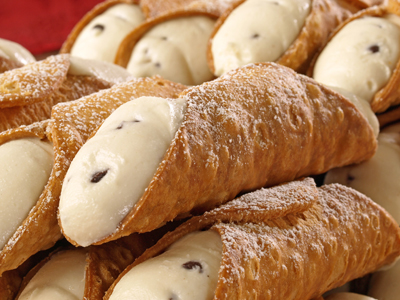 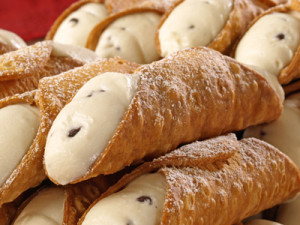 A Sicilian pastry dessert that originated in the Palermo region where cannoli were prepared during Carnevale season as a symbol of fertility.  The pastry eventually became a year round dessert throughout Italy although in Italy they are commonly known as cannoli siciliani.  Cannoli are sometimes called cannolis which is not the correct term.  Cannoli is the proper plural and cannolo is the singular (cannolu in Sicilian means little tube).

In a medium bowl mix together the flour, sugar and cinnamon.  Cut in the shortening until it is in pieces no larger than small marbles.  Make a well in the center and pour in the egg, egg yolk, Marsala wine, vinegar and water.  Mix until the dough becomes stiff then knead on a clean surface.  Feel free to add a bit more water if needed.  Knead for 10 minutes and then cover and refrigerate for 2 hours.  Divide the dough into thirds and flatten each one just enough to get through the pasta machine.  Roll the dough through successively thinner settings until you have reached the thinnest setting.  If you don’t have a pasta machine then you will need to keep rolling the dough until it is super thin.  Place the sheet of dough on a lightly floured surface.  Using a form or a large glass or bowl, but out 5 inch circles.  Dust the circles with a light coating of flour.  This will help you later in removing the shells from the tubes.  Roll the dough around the cannoli tubes.  Seal the edge with a bit of egg white.  The cannoli tubes are crucial.  Ask your local Italian grocer where you can get them.  Many kitchen stores carry them or go online and find them.  The tubes are 6 to 8 inches long, hollow and stainless steel.

Heat the oil to 375° F in a deep fryer or a deep heavy skillet.  Fry the shells on the tubes a few at a time for 2 to 3 minutes or until golden brown.  Use tongs to turn as needed.  Carefully remove the shells using the tongs and place on a cooling rack set over paper towels.  Cool just long enough that you can handle the tubes.  Carefully twist the tube to remove the shell.  Using a towel may help you get a better grip.  Wipe off the tubes and use them for more of your shells.  Repeat the frying process until you have fried all of the shells.  Cooled shells can be placed in an airtight container and kept for up to 2 months.  You should only fill them immediately or up to 1 hour before serving.

For the cream add the Ricotta Impastata, sugar, cinnamon oil and vanilla extract into a mixer on medium speed.  Mix for 2 minutes.  In the last ten seconds add the chocolate chips.  The filling for the cannoli are made from a high quality Impastata Ricotta Cheese which is a type of ricotta that has been drained of almost all of its moisture.  It is smooth and has a very fresh taste.  It keeps for a long time in the refrigerator and will not make the cannoli soggy due to the lack of moisture.  If you cannot find Impastata Ricotta, then you can use the Sorento Ricotta Cheese from the grocery store.  You will have to drain it overnight to reduce the moisture in the cheese.