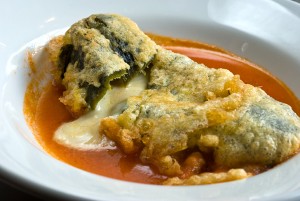 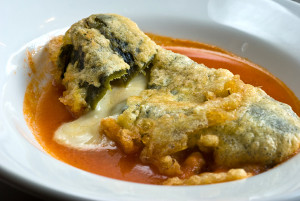 Chile Relleno is a Mexican dish that originated in Puebla and literally means “stuffed chile.” Chile Rellenos are usually stuffed with melted cheese like queso Chihuahua or queso Oaxaca (which are good for melting). They are also stuffed with something called picadillo meat which consists of diced pork, raisins, nuts and spiced with canella. Typically roasted poblano peppers are used, but sometimes are substituted with Anaheim, Hatch, Pasilla or Jalapeno chili peppers. After stuffing the chile pepper it is either covered in egg batter or corn masa flour and fried. Then served in a sauce.

For roasting the chiles place them directly on the burner of a gas stove until they are mostly blackened on each side. If you have an electric stove then put the chiles under the broiler. Remove the chiles from the burner and place them in bowl covered with plastic wrap for a minute. Peel off the blackened skin with your fingers. Don’t worry if you don’t get every bit of the skin off. Slice each chile on one side from the stem to the bottom. Remove most of the seeds and membranes, but if you like the chiles spicy then leave them in. Cut the cheese into long slices that fit the chiles and stuff the cheese into each chile. Roll in the flour. Separate the eggs. In a medium bowl beat the egg whites and salt until they are stiff. In a separate bowl beat the egg yolks and then gently fold into the egg whites. Pour the olive oil into a medium sauté pan and heat on medium high. Dip each chile into the egg coating and drop into the oil and cook for 2 minutes until golden brown on each side. Turn once with a spatula. Drain on paper towels. Top with either tomato sauce or enchilada sauce. You can top with chopped cilantro, sour cream, green chiles or shredded cheese. Serves 2

For the sauce: Combine onions, chicken broth and tomatoes with the juice. Simmer while you are making the rellenos. Serve on the side or cover the rellenos before serving.