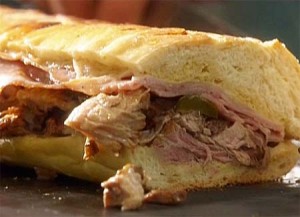 To assemble the sandwiches preheat a heavy skillet or grill pan over medium high heat.  Spread the bottom of each roll with the mustard.  Layer the pork, ham, cheese and pickles on the rolls (divide evenly).  Set the top halves in place and press gently.  Brush the tops of the rolls with the melted butter.  To grill the sandwiches place in the heated pan and use either a second pan or a weighted press to press down the cooking sandwiches.  Grill for 2 ½ minutes until the undersides are golden.  Turn the sandwiches over, press with the weight again, and cook for another 2 ½ minutes until the other sides are golden and the cheese is melted.  Serve immediately.  Serves 4