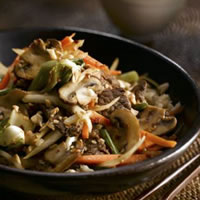 Most Friday nights I go out for some sort of Asian meal. I call it “Get Your Asian On Fridays.” For me it’s a nice break from the normal weekday meals. I think I’ve tried just about every Chinese and Thai restaurant near my apt. Sometimes I just like to make some sort of stir fry at home. Here is a tasty Ginger Beef recipe that I think you’ll like. If you’re not a fan of the mushrooms then swap them for a vegetable that you do like.