Arroz Con Pollo simply means “rice with chicken.” It is a traditional dish that is common throughout Latin America especially in Cuba, Panama, Peru, Puerto Rico, Costa Rica and the Dominican Republic. It is believed that this dish originated in Puerto Rico, but there is no direct evidence of this. Arroz Con Pollo resembles the Spanish dish, paella, both in its ingredients and cooking technique.

In a large Dutch oven, heat the olive oil over a medium high heat. Add the chicken thighs and cook for 10 minutes. Turn once and cook until browned. Transfer to a plate and reduce the heat to medium. Keep the chicken drippings in the pan and add the onion and red pepper to the drippings and cook for 5 minutes. Stir in the garlic and cayenne. Cook for 30 seconds. Add the rice and cook, stirring for 1 minute. Stir in the lemon peel, oregano, salt and chicken stock plus enough water to equal 2 cups. Return the chicken to the Dutch oven. Heat to boiling over a high heat. Reduce the heat to low and cover. Simmer for 20 minutes or until the juices run clear when the chicken is pierced with the tip of a knife. Stir in the peas. Cover and heat through. Remove from the heat and let stand for 5 minutes. Spoon onto serving plates and sprinkle with olives and cilantro. Serve garnished with lemon wedges. Serves 4 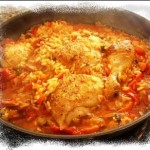 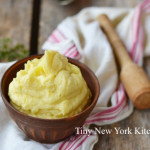