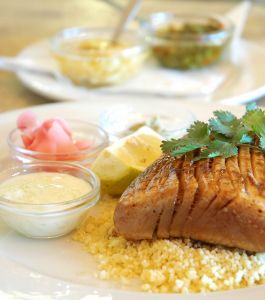 This recipe is one of my favorite summer entrees.  The dressing works well with tuna steaks not only because the flavors go well together, but because it is lower in acid than traditional vinegar based marinades and therefore the fish is less likely to cook as it marinates.  The Sesame Ginger marinade is equally delicious on sea bass, halibut, scallops and shrimp.  Make the dressing ahead of time.  It keeps well in the refrigerator.

Rinse and dry the tuna steaks.  Place them in a single layer in a shallow nonreactive baking dish and pour 1 cup of the vinaigrette over them.  Cover and set aside to marinate for at least 30 minutes.  If you plan to marinate the fish longer put it in the refrigerator.  Meanwhile preheat the grill to high.  If you don’t want to grill these steaks then it is fine to broil them in your oven.  When you’re ready to cook the steaks oil the grill rack.  Remove the tuna from the dressing and throw away the vinaigrette.  Grill the tuna steaks until nicely browned on the outside, but still translucent in the center 3 minutes per side for rare and 5 minutes per side for medium rare.  Remove from the grill and serve over rice.  Sprinkle each steak with a teaspoon of the toasted sesame seeds.  Serve immediately.  Serves 4