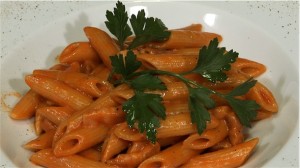 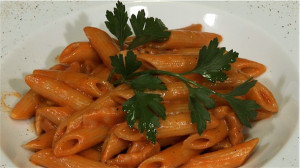 Heat the butter and oil in a large skillet over a medium heat. Add the pancetta and stir until lightly colored. Turn the heat down and slowly add the vodka. Stir until most of the vodka has evaporated. Add the tomatoes and cream. Season with the salt and pepper. Simmer uncovered for 8 minutes until the sauce has become somewhat thick in consistency. In the mean time, cook the penne in boiling salted water according to the package directions. Drain the pasta and place in the skillet with the sauce. Add half of the Parmigianino and mix over a low heat until the pasta and sauce are combined. Remove from heat and serve. Garnish with a sprig of Italian Parsley. Serves 4