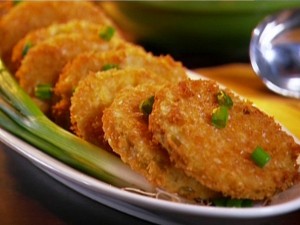 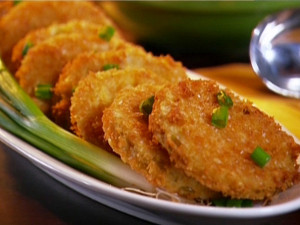 Fried Green Tomatoes probably didn’t originate as a Southern dish, but have become a Southern classic over the years. It is thought that they were introduced in the Midwest and Northeastern parts of the United States by Jewish immigrants. By the early part of the 20th century, Fried Green Tomato recipes began popping up in newspapers, magazines and restaurant menus (for breakfast, lunch and dinner).

Cut the tomatoes into ½ inch thick slices and set aside. In a large skillet, cook the bacon over medium heat until browned. Transfer the bacon to paper towels to drain. Crumble the bacon and set aside the skillet with the bacon drippings. In a pie plate beat the egg white and salt together. On a piece of waxed paper combine the cornmeal and ground pepper. Dip the tomatoes in the egg mixture, pressing so the mixture sticks to the tomatoes. Place on a separate piece of waxed paper. Heat the bacon droppings in the skillet over medium high heat. Cook the tomatoes for 1 ½ minutes on each side, in batches, until golden brown. Transfer to paper towels to drain. Place tomatoes on a serving platter and top with the bacon and/or chives. Serves 6