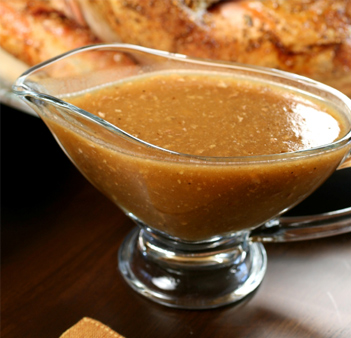 Many people are afraid to make gravy, but it is actually pretty easy to make. Here are simple steps to make perfect Turkey Giblet Gravy!

In a 3 quart saucepan, heat the giblets, neck and water to boiling over a high heat. Reduce to a low heat, cover and simmer for 1 hour. Strain the broth into a large bowl. Pull the meat from the neck and throw away the bones. Coarsely chop the neck meat and giblets. Cover and refrigerate the meat and broth separately. Next, remove the rack from the roasting pan. Pour the drippings through a sieve into a 4 cup measuring cup. Add 1 cup of the broth to the roasting pan. Stir until the brown bits are loosened. Pour the drippings into a cup. Let the cup full of drippings stand until the fat separates from the meat juice. Spoon 2 tablespoons of frat from the pan drippings that were in the cup, into a 2 quart saucepan. Skim and throw away the remaining fat. In the saucepan, stir in the salt and flour. Stir constantly until golden. Add the remaining broth and enough water to the pan drippings, in the cup, to equal 3 ½ cups. Gradually stir into the saucepan. Cook and stir until the gravy thickens and boils. Stir in the reserved meat. Heat through. Makes about 4 cups.