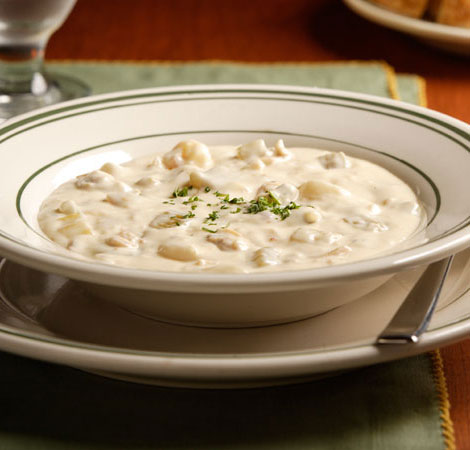 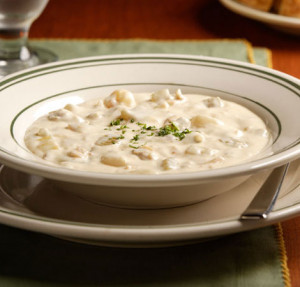 In the 16th and 17th centuries, fish chowder was enjoyed by the French as well as by the Native Americans.  In America, by 1751, recipes for fish chowder began to appear in newspapers.  Many were prepared by “layering chowder ingredients.”  Each ingredient was placed in a pot in a layer of uniform thickness, then slowly cooked.  By the mid-18th century, chowder was a mainstay throughout the Northeast.  Clams and other shellfish were added to chowders largely because of their great availability, as all one had to do along the shore was to dig them up.  When the 1896 edition of the Boston Cooking School Cookbook contained three recipes for chowder, it was clear that chowder was here to stay.

In a medium saucepan, heat water to boiling over high heat.  Add clams and heat to boiling.  Reduce heat slightly.  Cover and simmer for 5 to 10 minutes until clams open up.  Transfer clams to a bowl as they open.  THROW away any clams that have not opened.  When the clams are cool enough to handle, remove them from their shells and coarsely chop.  Throw away the shells.  Strain clam broth through a sieve lined with paper towels into a measuring cup.  If necessary add enough water to equal 2 cups.

In a medium stockpot cook bacon over medium high heat until lightly browned.  Remove bacon to paper towels.  Add onion to bacon drippings and cook until tender – stirring occasionally.  Stir in flour, pepper and salt until blended and cook for about a minute.  Gradually stir in the clam broth until smooth.  Add potatoes and heat to a boil.  Reduce heat, cover and simmer until potatoes are tender (for about 20 minutes).  Stir in half & half, butter, milk, bacon and chopped clams.  Heat through, but do not boil.  Serves 6