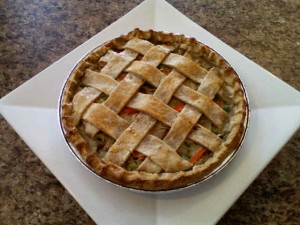 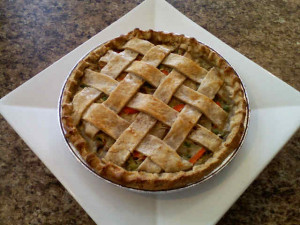 When there is a chill in the air and a hurricane on the way it is a good time for heartier fare. This savory meat pie makes the perfect dinner.

Pat the beef dry with paper towels. In a large skillet heat 2 teaspoons olive oil over medium high heat. Add the beef and cook until browned on all sides. Stir in the garlic and cook 1 minute longer. With a spoon transfer the beef mixture to a bowl. In the same skillet, heat the remaining olive oil. Add the carrots and onion. Cook for 10 minutes until browned. Next, add the beef back to the skillet along with the beef bouillon, salt and 1 ¼ cups water. Heat to boiling over a high heat. Reduce the heat to low and cover. Simmer for 40 minutes. In a cup mix the cornstarch and ¼ cup of water and gradually add to the skillet. Cook over a high heat for 1 minute until the mixture thickens. Stir in the peas and remove from the heat. Prepare the Parsley Crust. Preheat the oven to 425° F. On a lightly floured surface, with a floured rolling pin, roll half of the dough into a large round that is large enough to fit into a 9 inch pie plate. Ease the round into a greased pie plate and spoon the filling into the crust. Trim any pastry edge, leaving a 1 inch overhang. Roll the remaining dough into a 10 inch round. Cut into ½ inch wide strips. Place half of the strips about ¾ inches apart across the pie. Do not seal the ends. Fold every other strip back halfway from the center. Place the center cross strip on the pie. Replace the folded part of the strips. Fold back alternate strips and add the second cross strip. Repeat to weave the strips into a lattice. Seal the ends. Fold the overhang under and make a fluted edge. Bake on a cookie sheet for 35 minutes or until crust is golden brown and the filling is bubbly. Serves 4

In a large bowl, mix flour, chopped parsley and salt. With a pastry blender cut in ¾ cup of shortening until the mixture resembles coarse crumbs. Stir in the cold water 1 tablespoon at a time. Mix lightly with a fork after each addition until the dough just holds together. Do not over mix. Divide the dough in half and shape each into a ball.