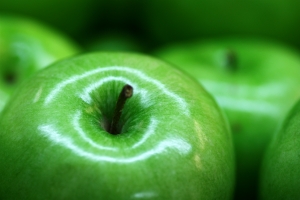 Preheat your oven to 350° F.  You will want to make the sauce first.  In a medium size pan combine the water, the 1 1/4 cups sugar and 1 teaspoon ground cinnamon.  Bring the mixture to a boil and then reduce the heat.  Simmer for 5 minutes.  Finally add the 1/2 cup butter, stir, remove from the heat and set aside.  Next you will want to make the pastry.  In a medium size bowl combine the flour and salt.  Cut in the shortening until the pieces are pea size.  Do this using either a fork or a pastry blender.  Sprinkle 1 tablespoon of the half & half over part of the flour mixture.  Gently toss with a fork.  You will now push the moistened dough to the side of the bowl.  Repeat moistening the dough with another tablespoon of half & half.  Repeat until all of the dough is moistened.  You may not need to use the entire 1/2 cup of half & half.  Form the dough into a ball.  On a lightly floured surface, roll the dough to an 18×12 inch rectangle.  Cut into six 6 inch squares.  In a small bowl combine the raisins, walnuts and honey.  In a separate bowl stir together 3 tablespoons of sugar and 1/2 teaspoon of the ground cinnamon and set aside.  Core and peel the apples.  Place an apple on each pastry square.  Fill the apples with the raisin mixture.  Sprinkle with the sugar & cinnamon mixture.  Dot each with a 1 teaspoon of butter.  Moisten the edges of pastry squares with water.  Gather the corners around the apples.  Pinch to seal.  Place the dumpling in a 13x9x2 inch baking pan.  Heat the sauce, again, to boiling and then pour over the dumplings.  Bake (uncovered) for 1 hour.  You will want the apples to be tender and the pastry to be golden.  Spoon the sauce over the warm dumplings and serve.  Serves 6